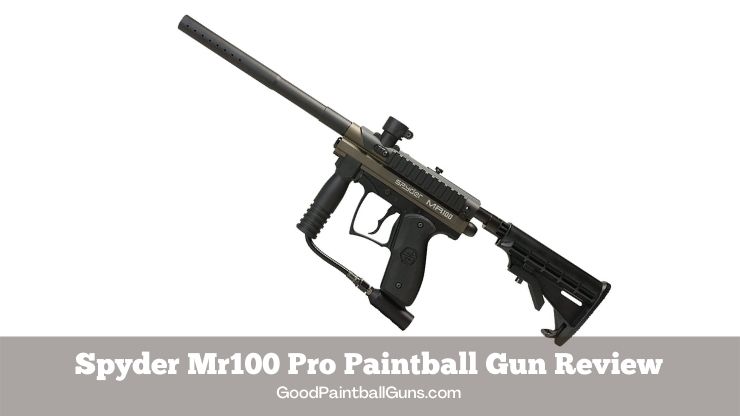 Before finalizing a paintball marker best suited for your skill level, thorough research is essential. You have to test out the marker of its important factors like accuracy, reliability, and maintenance, which is undoubtedly a hard, time-consuming task. What if we tell you we have a good paintball gun, an all-rounder skills-based paintball marker for players?

Kingman Spyder MR100 is a great semi automatic paintball marker; it doesn’t matter if you are taking your first step in the paintball arena or have been playing paintball for quite a time.

This military style gun got you covered. Our experience with Spyder marker led us to conclude that this is one heck of an accurate, light weight gun with much less maintenance hassle and is easy to clean. We will explain its features, pros & cons in-depth to decide for yourself why it is best suited for entry level and pro-level paintball players.

As mentioned above, Spyder Mr100 Pro Paintball Gun is a semi automatic paintball marker that is quick and makes effective straight shots with the lightweight bonus.

It is manufactured by a well-known company in the paintball industry, Kingman, introducing evolved quality based and affordable paintball markers since 1992.

Unlike other paintball markers, the spyder marker has a tough military theme design. It has a realistic sniper look and feels with its long front grip. With its two trigger system, you will have great control over the shots, and knocking out your opponents has never been this easy.

Spyder Mr100 has Picatinny rails, an important feature, especially for customization. Not only does it look good, but it is also a strong build and delivers exceptional execution.

It operates on compressed CO2 gas with an air efficient EKO valve mechanism, which lets you shoot 1500 to 1600 shots per tank with the same speed consistency. This mechanism also saves paintballs from breaking inside the barrel.

You can shoot up to 6 to 8 balls per second, although the pull trigger takes a bit longer time. Any pro player can easily hit the target at 300 feet. The marker uses standard size paintballs of .68 caliber.

Other remarkable features in this paintball marker include a steel braided air hose, a compressed air tank of 20 oz, a durable barrel of 12″, clamping feed neck, high impact polymer, and velocity adjuster. Players can easily adjust the speed of the air with a simple screw at the side of the gun.

The Kingman Spyder Mr100 paintball marker is the simplest one yet to clean from the inside out. In just a few minutes, you can clean it up without tearing it apart. It has a single-bolt system, removes one piece, opens the marker in half, and cleans it.

A handy feature even during an intense paintball match. For the paintball gun’s longer service, oil its piston from time to time. This part of the gun is expensive to change if damaged and will affect its accuracy.

With all the great specs, it still is an affordable paintball marker in the market. It’s logical not to buy an expensive gun for beginners. Spyder Mr100 Pro not only has great accuracy but is also safe to use because of its durable body structure.

It can easily be handled and maintained. Its accuracy and long range make it a good choice for pro-level players at an affordable price.

However, if you get the whole kit, you might have to spend some extra bucks. But many consumers complained about not getting high quality accessories like the paintball marker.

Aluminum is the key ingredient of this marker, which is light weight and durable. Carrying around this gun won’t put extra weight on you whatsoever. Even its rails are made of aluminum which you can use for further upgrades to advance your skills.

It has an anodized finish, keeping the paintball marker free from corrosion. It also makes it weather friendly, and you don’t have to worry about taking it out in the rain.

How Spyder Mr100 is an all-skilled paintball marker and why you should consider buying it?

The Spyder Mr100 paintball marker offers great accuracy and consistency at an affordable range. Its strong, durable build body and easy maintenance make it a perfect go-to choice for beginners.

This level of performance at a reasonable price makes it an ideal option for those who have just started their paintball journey and those skilled players who are on a tight budget but in need of a good performing paintball marker.

After reading this spyder mr100 review, we are sure you know why we concluded Spyder Mr100 as an all skilled paintball marker. All these features will help you in your gun thorough research.

It is a great option to consider for everyone, especially the entry level paintball players because it offers great accuracy at an affordable range with low key maintenance. A bonus for beginners who don’t know much about paintball markers maintenance and experience.

The only notable drawback from many users is the low quality accessories that come with the whole kit.

How much is a Spyder MR100 paintball gun?

However, many customers complained about the kit’s low quality accessories, so we recommend you just go for the paintball marker if you are starting.

Is the Spyder MR100 A good paintball gun?

Yes, it is a great gun to consider for both newbies and experienced paintball players. It has efficiency, accuracy, range, simplicity, and affordable price, fulfilling both players’ criteria. If you are a beginner or a pro player on a tight budget, Spyder MR100 got you covered.

How fast does a Spyder MR100 paintball gun shoot?

You can easily adjust the speed through its velocity adjuster, and any experienced paintballer can shoot a target up to 300 feet. It can shoot 6 to 8 shots per second and about 1500-1600 shots per gas tank.

Can a Spyder MR100 use compressed air?

Yes, it uses a CO2 compressed gas tank of 20 oz to operate.

What size paintballs does a Spyder MR100 use?

Is the Spyder mr100 electronic?

Spyder MR100 is a semi-auto paintball marker which is a blowback gun. You fire the shots with the help of the bolt triggered through the release of the trigger.