Paintball VS Airsoft… Which one is better? A question each person asks before deciding which one to play with their friends and family. Both sports have a military combat oriented approach with some distinguished differences in style, look, equipment, the cost to play, type of ammo, safety accessories, and gameplay.

Honestly, both are good shooting games where players take cover behind objects and shoot opponents while avoiding being shot themselves. These have their own highs and lows.

To understand fully you need to know everything there is about paintball and airsoft to decide which one will be best suited for you. You get to experience real lifelike combat scenarios in both games that are for sure. Without any further delay let’s start with the basics. 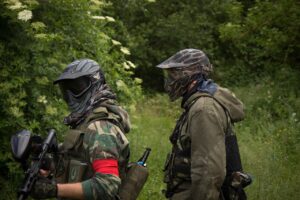 Paintball uses a small 50 caliber size of paintball, made of soluble dye solution in a gelatin shell meant to break on impact.

Players use air powered markers or guns to shoot their opponents. Its gameplay focuses on teamwork, stealth, and strategy.

What is Airsoft & Airsoft Guns?

Airsoft is a realistic military combat simulation game. Players get the realism feelings from its shockingly realistic firearm that shoots biodegradable bb plastic pallets of 6mm. These do not break on the impact and can be reused as well.

Airsoft guns, Airsoft rifles & airsoft ammunition are basically used in this game. This game, along with shooting, tests players’ honesty as well. Players have to shout “hits” upon being hit by an airsoft bb, unlike paintballs where players are marked with visible paint.

To play airsoft games to must know about airsoft gear and equipment required to play in airsoft field.

Difference Between Paintball and Airsoft

Although they look like and seem to have a similar nature, these have visible differences which makes them both unique in their own way. Along with all these differences, we will also discuss all the advantages and disadvantages of playing paintball and airsoft as well.

If we talk about which game firearms have the most realism to them then without a doubt it would be airsoft. Airsoft guns are like real world firearms both in performance and look. Players get to load the bb palettes in the magazines which is an easy process and more life like. A magazine can hold up to 400 BBs round at a time.

Paintball markers have a lot of other essentials attached to them like air tanks and hoppers which give more of a sci-fi firearm appearance instead of real weapons.

Hoppers are used to load the guns that need to be set upright for proper loading and can hold up to 200 rounds. This number can differ from hopper to hopper. Paintballs sometimes do get stuck in them and need to be shaken for reloading the marker.

For safety purposes, both sports have a limit set to the velocity of the gun by authorities. Paintball’s velocity limit is set at 300 fps (feet per second) which is the international standard limit. Paintball markers have more speed to them than accuracy. Players raise the level of accuracy by customizing the barrels of the guns.

Airsoft guns have fps ranging from 300 to 500. This means that these have more accuracy than the paintball markers. We know what you are stressing about. No, getting hit by a BB palette of 6mm that is smaller than a paintball is still not painful at all.

Airsoft guns require biodegradable bb plastic pallets of 6mm as ammo. They can be reused and are less expensive. Although being hit by them is not painful and sometimes players don’t feel a hit. They are small in size so they are not visible to the human eye after being shot.

Paintballs are soluble dye in a gelatin shell that breaks apart upon hit. These are more expensive than bb palettes and can not be reused. They are slightly bigger than bb pellets so are visible to the human eye on being shot to give players the leverage of dodging.

Paintball requires a lot of essential equipment other than just a marker and paintballs like air pressured tanks, hoppers, safety masks, gloves, knee pads, paintball pods, and so on. This makes paintball a bulky game in which players need to consider all the weight they have to carry during a match.

Whereas in airsoft, players only require a marker, safety goggles, and BBs. Other gears are optional like safety masks, bags, and so on. Hence it’s not much of a bulky shooting game where there is no need to carry lots of loads and is very comfortable and light to play with ease of mobility.

Airsoft has a reasonable cost to it since it does not require a lot of equipment to play with and its ammo is less expensive and can be reused. Most airsoft guns use rechargeable batteries or are spring loaded hence are cost effective.

Whereas paintballs require a lot of equipment other than just a marker. It’s advisable to divide the overall budget you have in case you want to play paintball. Paintball markers operate with air pressured gas and need essential things like hoppers to feed the ammo making it an expensive sport.

Not only this the paintballs are not reusable and are also a bit more expensive than the bb pellets. Paintball being an expensive sport is the main reason why people switch from paintball to airsoft. Nevertheless, it still is an adrenaline driving sport that attracts many individuals.

Airsoft players only require light face protection to enter a match. Usually, players more than 10 years old are eligible to play airsoft. Since there is no visible sign of being hit with bb pellets, players have to announce being “hit”, it’s more of an honesty test as well.

In contrast, paintball players have to wear full safety gear to be eligible for play. The paintballs make it easy to see and count the shot. The entry age for paintballs is also 10 years old, although 16 to 30 age individuals participate more in it.

Paintball has more different types of gameplay to enjoy like capture the flag, bomb the base, attack and defend, hostile takeover, team deathmatch, and so on. These matches are longer and some of them don’t have a time limit. There are many different games in airsoft as well like police shootout, team deathmatch, protect the president, and so on. Usually, airsoft matches are timed.

Airsoft is not a messy game at all that is why it can be played both indoors and outdoors as long as the indoor area is sufficiently big enough to provide space for running around and hiding behind different obstacles.

RAF bases, shopping malls, big empty parking basements, warehouses, abandoned buildings, and woodland areas are good playing areas. Paintball games are mostly held outdoors in locations like forests, farms, and open fields because of the use of paintball ammo. This medium is pretty messy and needs an after-cleaning as well.

Is Airsoft better than Paintball? Paintball vs Airsoft

Airsoft offers more realism, is less costly with eco-friendly ammo, and is a light game where players don’t have to carry much around and can freely move around. This game is less messy compared to paintball. You don’t have to buy extra accessories for it.

It is also an undeniable fact that many players switch from paintball to airsoft or prefer airsoft more solely because it is more cost effective and less bulky.

However, there is no denying the fact that paintball is also a great physical sport that is more popular than airsoft. Since it is mostly played outdoors in big fields up to 5000 players have been recorded to take participation in the tournaments.

In both games, players need to eliminate the opponent with the help of a real look-alike gun in a combat situation. Both games offer real combat military-like scenarios with a great thrilling adrenaline rush of being in an action movie, although airsoft seems more freakishly real because of its weapons’ greater realism.

The difference lies in their equipment, ammo, rules & regulations, safety gear, and cost. We covered every single thing there is to know about both shooting games for you to make a better decision for yourself as to which suits you the best.

Hopefully, you liked the article about Paintball vs Airsoft. Finally, both are good ways of spending time with your friends and family and being physically active. It all comes down to your preference, style, and most importantly your budget for these two sports.